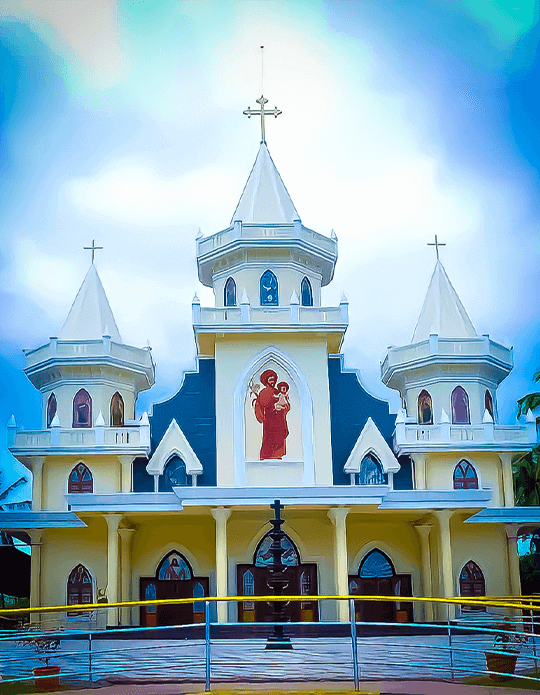 The eparchy of Mananthavady was erected by His Holiness Pope Paul VI, by the Bull Quanta Gloria of March 1, 1973 bifurcating the vast diocese of Tellicherry. The dioceses of Tellicherry and Mananthavady were erected for the migrated people from the central Kerala. Population explosion and the shortage of food during the post-war period (1945-1960) induced them to migrate to the uninhabited fertile lands of northern Kerala and to some isolated pockets of Tamilnadu and Karnataka States. These places were filled with thick forests and under the threat of malaria and other diseases. The migrated people, being agrarian, risking their own life cleared the forests and settled themselves cultivating paddy, rubber, coconut, coffee, cashew, pepper etc.

The diocese of Mananthavady was comprised of the civil districts of Wayanad and parts of the civil districts of Malapuram and Kannur in Kerala, the Nilgiris district in Tamilnadu and the districts of Shimoga, Chickmangalore, Hassan, Mandya, Mysore and Chamarajnagar in Karnataka. The parishes under the Manimooly Forane in Malappuram district and some of the parishes under the Peravoor Forane in Kannur district were added to diocese of Mananthavady on 1975 December 31st by the Oriental Congregation. Shimoga Mission Region which was entrusted to the Missionary Congregation of the Blessed Sacrament (MCBS) was erected as the the Diocese of Bhadravathi on 21st August 2007 and Rev. Dr. Joseph Arumachadath was appointed as the first bishop. The diocese of Bhadravathi was inagurated and Mar Joseph Arumachadath was consecrated bishop and took charge of the diocese on 25th October 2007. The district of Mandya was entrusted to the pastoral care of the Missionary Society of St. Thomas (MST) and the district of Hassan was entrusted to the Congregation of the Carmelites of Mary Immaculate (CMI). Mysore and Chamarajnagar were under the direct pastoral care of the Diocese of Mananthavady. The diocese of Mandya was erected on 18th January 2010 and all these mission regions ( Mandya, Hassan, Mysore and Chamarjnagar) became part of Mandya diocese. Msgr. Geroge Njaralakkatt was appointed as its first bishop. On the same day, (18th January 2010) the district of Chickmangalore which was entrusted to the Norbertine Fathers (O.Pream) was transfered to the Diocese of Bhadravathi. On 7th April 2011 the diocese of Mandya was inagurated and Msgr Geroge Njaralakkatt was consecrated bishop and took charge of the diocese. At present the Eparchy of Mananthavady has an area of approximately 13,036 sq. kms and a population of 1,71, 200 Syrian Catholics and 145 parishes.

Mar Jacob Thoomkuzhy (Archbishop Emeritus of Trichur) was consecrated as the first Bishop of Mananthavady on May 01, 1973. Tellicherry diocese was raised to the status of Metropolitan Archdiocese by the Papal on 18th May 1995. After 22 years of able guidance, on June 07, 1995 he was transferred to the diocese of Thamarassery. The then Protosyncellus Msgr. Joseph Kaniamattam was appointed the Administrator of the eparchy on July 27, 1995. On January 26, 1997 Bishop Emmanuel Pothanamuzhy CMI was consecrated the second bishop of the eparchy. After the demise of Bishop Pothanamuzy on April 06, 2003, Protosyncellus Msgr. George Njaralakatt was appointed the Administrator of the eparchy. The present bishop Mar Jose Porunnedom was appointed on March18, 2004 and was consecrated the third bishop of Mananthavady on May 15, 2004 and took charge of the office on the same day.

Get touch with us

© Copyright reserved 2021:This Service is developed and maintained by  SMCIM  (Syro-Malabar Church Internet Mission).
Contents in this website is maintained and sole property of Eparchy of Mananthavady